We left for church this morning at least ten minutes late, which normally pushes my buttons big time. But, Steve wasn't the only one running late. I was, too. Rushing to the car, we missed most of the lights on our twelve mile trip. As I coped with anxiety over our lateness, I gazed up at the clouds, brilliant pillows and streaks of white against a vivid blue sky. No rush there today!
Pulling into church, I wanted to duck in the back and sit down unnoticed, but instantly two friends greeting us with hugs. "Were you the one praying for me all week?" Sue said. "I had the best week in such a long time! Thank you!" Her long hug gave me a deep welcome.
The sanctuary was packed. No hiding this late entry as we whispered, "Sorry, but is this seat saved?" We'd missed the entire worship time, until a middle aged man came to the stage and gave a testimony about losing his dad in 1980, and what a strong example he'd been. That alone was a tear-jerker until he began to sing a song about his father, waiting to see Him again in glory. His teenaged daughter accompanied him beautifully on the violin. My husband and I were so moved, having recently said good-bye to his dear mom at 94. In my heart I thanked God for this comforting music.
That would have been enough. But next our Assistant Pastor delivered on terrific message on mentoring, illustrated with fun personal examples and in-depth Bible truth. Wow! At the end, as usual in our church, the altars were opened if anyone needed prayer or wanted to receive Christ. As an altar prayer minister, I walked to the front, waiting to see if anyone needed prayer. Within a minute or two, both altars were filled. People needed prayer for a host of issues, which is always a joy, but best of all four people came up front to receive Christ. There was a little nine year old girl, a man on crutches, and another couple standing weeping. What joy in the Kingdom of Heaven! How important was this day to God's purposes! It's humbling to realize God has use for me even when I feel "out of sorts." Maybe what matters most to God is just showing up and being willing to do His will.
Posted by Virelle at 4:31 PM No comments:

Email ThisBlogThis!Share to TwitterShare to FacebookShare to Pinterest
Labels: being late, doing God's will, rejoicing in His purposes

Hi, friends,
You can see by the date of my last post that we were away all summer. Those eight weeks held great welcomes, renewed friendships, and sorrows, too.
Here's a quick peek at our news: Our son David and his wife Jose welcomed their third little boy on August 5th. Here are big brothers Jack (4 1/2) and Stephen (3) holding new baby Lucas Alexander Zeilstra Kidder on his first day of life. What a joy!
The same week, my college roommates held a day long celebration in New York City after 44 years of being apart. Well, actually,I was the only one really apart. Thanks to Gail, Gayle, Janet, and Ceil, I'm now "found" and looking forward to seeing them again next year or sooner. What a shame to lose track of those so dear to us. I'm forever grateful to my terrific roommates for finding me and making me feel so welcome. You can't imagine how much talking it took to catch up! None of us, of course, had changed much in that time. Ahem! Take a peek: 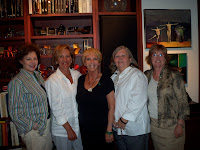 Last, on August 28th we said good bye to Steve's dear mom, 94, who entered heaven just hours past her 72nd anniversary. Dad, at 97, was continually at her side. What a love they shared, and such an example of family life to us! I've been so blessed to have such loving in-laws. We'll miss GrandmaLu greatly, as will all our kids.
We limped home after Lucas's birth as my husband severely injured his back on the trip. Now, I'm happy to report, he is feeling much better and receiving treatment here in Florida. I'm about to begin work on two new book proposals and my long delayed novel.
Hugs and blessings to you!
Virelle
Posted by Virelle at 12:43 PM No comments: